Agnes : The horror drama will hit the theatres soon!! 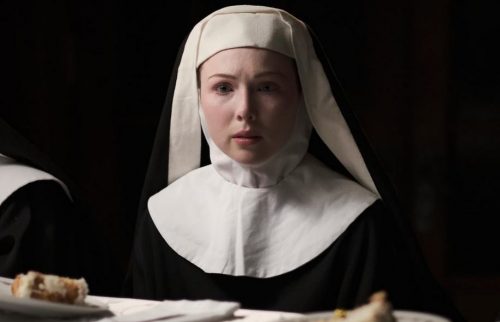 Movie Agnes is coming soon !!! Agnes’ release date has been announced. The American Horror drama movie has Hayley McFarland as the titular character of Agnes. The main plot of the movie revolves around the demonic possession at a religious convent and it follows Hayley McFarland’s character as Agnes. Agnes is a nun who behaves outrageously at the church which leads to blasphemy. Audiences are anticipating the Agnes movie for its unique plot. The movie is a must-watch due to the suspense which will keep audiences on the edge of their seats until the end of time! So, get ready to watch a scary movie this December.

When will the movie Agnes release theatrically?

The movie is set to release on December 10, 2021. This Horror Movie will be released both in theaters and online! So, watch it with your friends and family at a cinema near you this winter season! The movie was premiered at Tribeca Film Festival in June 2021.

Who will be in the cast of Agnes movie?

What is the storyline of the movie Agnes?

The story of Agnes follows the demonic possession at a religious convent. Sister Agnes one day behaves outrageously inviting blasphemy. Many paranormal activities occur at the convent. The church sends for veteran father  Donaghue and younger priest Benjamin to investigate the unusual incidents inside the convent. Both of them have to confront temptation, bloodshed, and crisis of faith. In Agnes’ trailer, we can see her screaming while being haunted by something/someone at night!

What can we expect from Hayley McFarland in the movie?

She looks terrifying in the trailer. It seems she has got a pivotal character in the movie. In the movie, Hayley McFarland portrays the role of nun Agnes who has demonic possession. We expect her acting skills in the movie as most people know she’s an actress with talent. She has done many movies with different genres like horror/suspense etc.

The trailer is released! So let’s see what the movie can offer us?

The movie’s trailer is out and it gives us a glimpse of it. It looks like it is going to be a horror movie where Agnes might get possessed by something. The whole tone seems pretty creepy. The dialogue delivery and the acting can be seen as well. Agnes is played by Hayley McFarland and the voice of her sounds like that of a possessed girl. The dialogue delivery and expressions show us how she could get possessed, which looks pretty realistic to me.

The audience can expect the movie to be a classic horror drama with jump scares. They are expecting this movie to be a little bit more creepy after watching the trailer. What I think is that you have to be prepared for the climax of the movie, as it has a very different way to make its audience jump. Also, the depiction of the titular role in the trailer shows Agnes being possessed by something invisible. It looks scary as hell with its dark atmosphere.

Yes, it will be a good horror drama movie to watch in the theatres! The trailer seems to have left us very curious about its plot and character. The movie is worth being watched! The cast is brilliant, the storyline has the potentials of being a great thriller. Hayley McFarland’s performance is expected to leave you speechless.

I recommend people who like thrillers and supernatural themes like The Conjuring (2013) & Insidious (2010). If you loved those movies then Agnes will not disappoint!! It has an amazing cast, Agnes trailer will leave you craving for more.