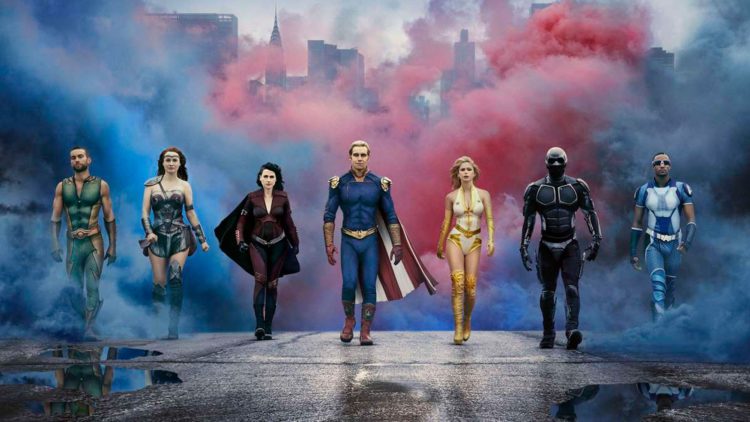 The Boys *spoils* season 3 ending: Set Photos Leaked, Spoilers, Premiere Date, and Casting Updates! The boys have been busy in the past few months filming The Boys Season 3. The show has been shrouded in secrecy for most of its production cycle. But now set photos from The Boys Season 3 finale leaked online, revealing a whole lot about; what can be expected; to happen next for Billy Butcher (Karl Urban), Hughie Campbell (Jack Quaid), and Mother’s Milk (Laz Alonso). The last episode; will also see the return of Frenchie, played by Ebon Moss-Bachrach, who was seen on set with Jack Quaid.

The Boys was created by Eric Kripke, Evan Goldberg, and Seth Rogen. The show is based on the comic book series of the same name that was published from 2006 to 2012 by Wildstorm Productions (an imprint of DC Comics), written by Garth Ennis and illustrated by Darick Robertson. The TV adaptation premiered on June 26, 2019, on Amazon Prime Video in more than 200 countries and territories, with a release date for Netflix set at July 26.

The first two seasons were released as eight episodes each, while season three will consist of only six episodes.

Aside from serving as executive producer alongside Neal Moritz, James Weaver has been promoted to co-showrunner alongside Eric Kripke. This is Kripke’s last season as The Boys showrunner.

The boys are back for their third and final season, which will consist of six episodes instead of eight like its predecessors. Set photos leaked have revealed what fans can expect when it comes to who makes it out alive in this one; we’re talking spoilers, after all!

“The Boys,” the Amazon and Sony Pictures TV adaptation of Garth Ennis’s The Boys comic series, is an ensemble drama about a group of vigilantes who set out to destroy corrupt superheroes with no regard for human life. The superhero team includes Billy Butcher (Karl Urban), Wee Hughie (Jack Quaid), The Female(Elisabeth Shue) Mother’s Milk (Tomer Kapon). In season two, we see The Seven making their way back from Afghanistan after being drugged by Sgt. Carter during a mission in which they were ordered to execute children under orders from CIA operative Maxine Angelis. The opener begins with them waking up naked on the beach near Hotel Moscow – presumably hours before having been captured at sea.

What can we expect from “The Boys” Season 3?

The beginning episode starts right where Season two ended: the main protagonist Homelander’s ( death. It was revealed that he had died from drowning after his spaceship sunk into an ocean following his battle with “Mother” (Noomi Rapace). With him gone, it will be interesting what happens next for the other members?

How did The Boys spoil its ending?

The show is set to return with its third instalment; this year but as of now. There are no official announcements or spoilers; about what will happen when it does. It feels like we’re always one step behind; it doesn’t seem possible that they could keep up such high levels of secrecy while filming two seasons back to back without any leaks whatsoever! But just because we don’t know everything yet, doesn’t mean we don’t know anything.

The Boys *spoils* season three ending: Set Photos Leaked, Spoilers, Premiere Date, and Casting Updates! The Boys is coming back to the small screen with a bang! Season two left us on one heck of a cliffhanger. The show introduced time travel, but we were never told how it works or why certain people can do it, and others are powerless to stop them.

Cast Updates for The Boys Season 3

The boys are set to come back with star,s including Antony Starr, Tomer Kapon and Dominique McAdams joining the series regulars Karl Urban, Jack Quaid and Karen Fukuhara from previous seasons of The Boys.

Can we expect any star guest appearance on The Boys season 3?

The Boys showrunner Eric Kripke has confirmed that The Walking Dead alum Jon Bernthal would be making a cameo in the upcoming season.

He teases, “Jon is somebody who we thought about as soon as he was available to us.”

The first two seasons of The Boys have been adapted from Garth Ennis and Darick Robertson’s comic book series of the same name.