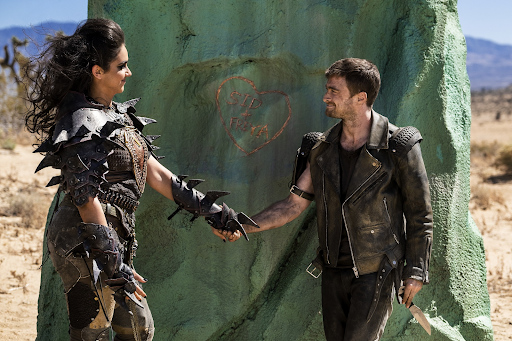 TBS has released the official trailer for the fourth season of its anthology series Miracle Workers. The newest season will officially be titled Miracle Workers: End Times. The latest season premieres this January on TBS. The last season of Miracle Workers was more like a short anthology series, with each episode featuring a different apocalyptic scenario that faced the show’s protagonists Adrian and Aaron. Along with new episodes, this “trilogy” will culminate in a special finale episode set to air on January 16, 2023, called “Miracle Workers:  End Times. Well, it looks like the world has always been in a state of chaos and disaster. This has been going on for thousands of years. The show follows some of the best people in history who have made life better for everyone around them and now face what’s left of humanity.  The Miracle Workers season 4 trailer teases that the apocalypse is nigh. The new batch of episodes will be set in 2023.

The Series was first released on February 12, 2019, and continued for the fourth season which is scheduled to be released on January 16, 2023.

Miracle Workers (also known as The Miracle Workers) is an American television anthology comedy-drama series that premiered on February 12, 2019, and is set to air its fourth season on TBS in the United States on January 16, 2019. The show follows a diverse group of people as they risk their lives to save humanity from a coming apocalypse. The series follows the lives of two lower-level angels, working for an angel named God at Heaven Inc. who are watching over the Earth to prevent it from being destroyed. The series plays off of Christian themes, but it is not a representation of actual Christianity. Rather, it’s a play on how we view religious figures to be infallible beings that will save us while they tell us they are on our side and some people worship them as entities that “first started as gods but then became perfected” or how humans look to them as the only source of hope when life deals us setbacks and tragedies.

Well, this is an anthology series that features a diverse group of people and how they deal with the end of the world. Yes, it’s a “faith” series, but it embraces its diversity under the guise of religion as a way to explore universal issues that affected people in different ways across time and cultures. Each installment will feature a different catastrophic event with each character dealing with it in their way. It’s an interesting idea that tries to take what usually is considered frivolous entertainment and apply it seriously and tries to show us how people might have dealt with such things in real life.

This series is for mature audiences. We are talking about the end of the world here. It’s only appropriate that we try to handle it as such. This is not a series for children to watch, so keep them away from this show. It is not a series that contains violent content, but there’s some language that might be offensive to some audiences. That being said, parents should take caution when letting their children watch this series.

Live Action Aladdin Sequel: The Comedy Action film Will Not Be Based On Animation Movies