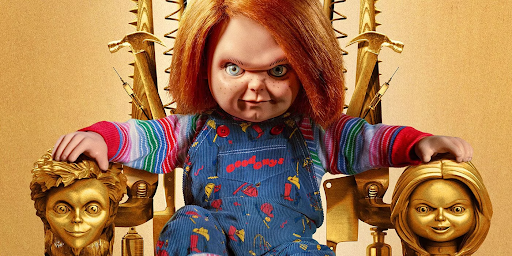 ‘Chucky’ is Killing It On Social Media”. “The film’s new social media strategy has been incredibly effective in promoting the remake, with fans posting everything from gifs to fan fiction. “An Abundance of Chucky’s: The Series” is showing us more sides of “Chucky” than ever before. With each season of theatres, there has been a change for Chucky in terms of his personality. He was first shrouded in mystery not knowing how he was made or what happened to him before recounting his tale and becoming a full-fledged killer. Now, he is slowly coming out of his shell, revealing some previously unknown sides to himself. The new Chucky series is helping the “Chucky” franchise develop a huge cult following. While it’s not necessary to see the films to enjoy the show, it’s clear that seeing the films helps with one’s enjoyment of the show.

The series was released on the 5th of October 2022.

The Series is about a boy named Jake who becomes the number one suspect in a series of murders after he befriends Chucky (who happens to be a serial killer) and reunites with his bully-turned-friend Lexy Cross (Alyvia Alyn Lind) and his crush-turned-boyfriend Devon Evans (Björgvin Arnarson). As he tries to make it onto high school dramas, Jake gets help from another unlikely friend. Meanwhile, Chucky continues killing. Jake learns that all three of them are suspected of the killings and must fight back against their fears while trying to survive the night. Chucky is still a little doll. But, he seems to have gotten over his fear of being seen as two separate people. The difference, though, is that this time there are actual reasons for him wanting that instead of just sitting until someone comes along and makes him human.

The Series is showing us more sides of Chucky than ever before. The way the character is portrayed in this series is so interesting and entertaining that one cannot help but love every second. One of the main factors behind this is Chucky’s genuine friendship with Jake, someone who hates dolls. Even if it was forced friendship, it doesn’t matter because we all know what a sociopath does when he sees people being close to something/someone he wants for his own, and he has no idea what real friendship means or feels like. Another factor that makes this series interesting and worth watching is just how creative the plot is and how many twists there are in each episode.

This series is perfect for anyone who is a fan of the “Chucky” franchise or anyone who likes watching horror movies but doesn’t necessarily enjoy reading about them. This series is really graphic and very violent, therefore, it’s not for anybody under 13. However, older people can watch this as well. Even though the series has been rated TV14 because some scenes may be too intense even for adults, the main protagonist is a teenager, so it’s not inappropriate to watch it if you’re over 16 or 17.