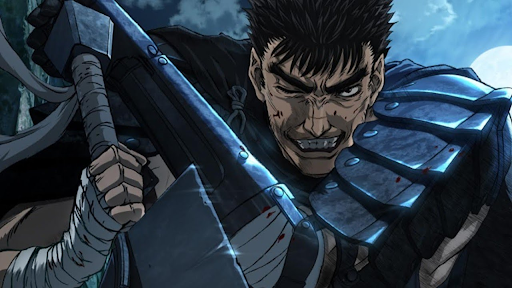 Netflix announced on Monday that the dark and violent ‘Berserk’ anime series is coming to Netflix this winter. The company will begin streaming the 1998-99 adaptation of Kentaro Miura’s manga beginning on December 1st. The series originally aired on Nippon Television between October 8, 1997, and April 1, 1998. It covers the events from the first manga from volumes 1 through 3. The story follows Guts, a superhumanly strong warrior who wields a large sword that absorbs his enemies’ souls. The story of Guts, a lone mercenary also known as “The Black Swordsman” who possesses supernatural strength and skill born from a curse, has been told through manga and anime for over 25 years. The 1997-1998 animated adaptation of Berserk retains much of the poignant tone that made it famous while creating a distinction between it and other adaptations. Berserk is one of the most unique adaptations in anime history. It’s dark, visceral, and raw — a true masterpiece that we’re thrilled to be able to bring back to fans around the world.

Who is in the voice cast?

Berserk will be available on Netflix beginning December 1, 2022.

Berserk is a dark and violent medieval fantasy manga by Kentaro Miura. Set in the fictional kingdom of Midland, Berserk tells the story of Guts, a mercenary who becomes involved in dark politics that threaten his life and the lives of many other people. Guts acquire fantastical weapons that allow him to fight against an onslaught of monsters and intimidating opponents. All of this is set within a richly detailed fantasy world that expands upon elements from history and mythology. Stories have been told about the origins of humanity in its war against demons, and Guts’ quest to find meaning involves bringing those stories to light.

What is exciting about the series?

The original manga and anime are justifiably popular within the Western anime community. The series is dark, violent, and darkly beautiful. Berserk functions as an excellent introduction to the world of anime for viewers who have never seen it before and provides critical context for those who know its history. It has been used to introduce people to the world of manga, and its premiere coincided with the rise in popularity of other dark fantasy anime like Evangelion and fighting anime like Rurouni Kenshin.

Berserk is a highly stylized and graphic series, with frequent bloody and disturbing violent scenes. it follows Guts’ journey through the series and tells a broader story about human nature, morality, and what it means to exist as human beings. His battles with demons and other supernatural forces reflect the conflicts faced by humans throughout history. The series is appropriate for mature viewers.