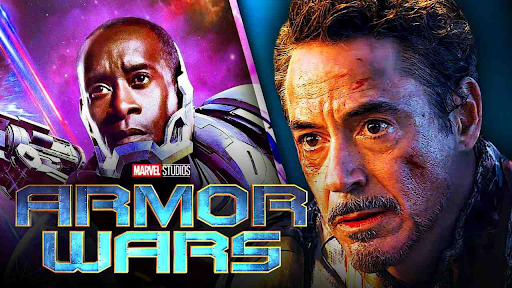 It looks like Hollywood is about to get a taste of the Marvel comic. Marvel and Disney have confirmed that Armor Wars will now be released as a film, and not the TV series previously planned. In Armor Wars, Tony Stark realizes that he’s inadvertently giving up blueprints for weapons to his foes after they successfully steal his inventions. This becomes particularly problematic when certain villains develop armor to deflect Iron Man’s weaponry. The film will be based on the Marvel comic of the same name, meaning it will be a direct adaptation of the story arc. Focusing on the aftermath of Iron Man’s weapon-building exploits, the upcoming film will not only look at Stark’s defense strategies but also his evolution into a more formidable and dangerous adversary as he goes up against some pretty bad characters. Nothing is set in stone yet in regards to when Armor Wars would hit theatres, but it looks as though things are looking positive. Deadline is also reporting that Marvel has already put together a script for this movie, so production could begin much faster than expected.

Why did Armor Wars become a movie?

Armor Wars was originally announced as a TV series before it was changed to a film. This could be because of budgeting. At the moment, Marvel’s movies have been quite expensive. That’s a lot of money for a two-hour movie. Disney, which also owns Lucasfilm, has been trying to make cheaper movies that can make enough money to cover their massive investment in these movies. Something like Armor Wars would have been too expensive for this strategy.

What Marvel is Planning for the film?

Iron Man has become a powerhouse in the Marvel universe after he completely revolutionized the way superhero films are made. However, we’ve yet to see his comic counterpart, Tony Stark’s character journey. With this film adaptation, it looks as though Marvel is ready to explore a part of that journey that fans didn’t get to see in the first Iron Man movie: a battle against his impressive arsenal. In the comics, Armor Wars was a very serious story about how Stark’s ingenious weapons gave one of his adversaries all of the tools that he needed to survive and even launched him into space to conquer the Earth. As we saw in Iron Man 3, Stark builds an incredibly sophisticated suit of armor, which serves as both defense and offense. Yet the movie didn’t touch on these aspects too much. Marvel seems ready to take a closer look at who specifically has this technology.

Fans are going to be pretty excited to see what Marvel has planned for the film. It looks like all signs point to this being a success, and that it will give us yet another Avenger in the Marvel Cinematic Universe. But of course, some fans have been skeptical. Not because they don’t think that the story could work well in a film, or because they think it’s better suited as a TV series rather than a film – but rather because they feel that something needs to change when adapting comic book characters into film versions of themselves.