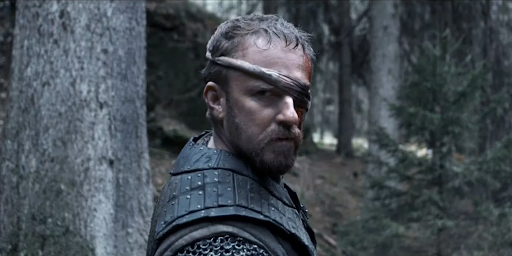 Medieval is a historical drama film by Petr Jakl that takes place in the 15th century. The film shows military leader Jan Žižka making a revolution in the Czech nation, and uses his story to explore notions of duty and faith during difficult times. This movie is meant for viewers aged 16-25, so it can be used as an example of how to pitch your work as well. Its length is 125 minutes. For any movie to stand out in the modern-day industry, it needs to have cinematography that will grab people’s attention, and this movie has no shortage of these qualities. We’re shown only what is necessary to make the points being made, and the film is a very plain and simple look at a time in history that people may not have been overly familiar with. The movie starts with our protagonist, Jan Žižka, in the middle of a battle. He’s been wounded and left for dead, but the film shows us the full battle, not to avoid the audience getting bored during a battle, but because it’s important for us to see his character. The movie follows him on his path toward creating change in the Czech nation.

In terms of content and story, the movie follows Jan Zizka’s movements as he moves through a series of battles against the forces of the Holy Roman Empire and the Knights of the Teutonic Order. The movie also shows how his actions in battle changed how people saw him, and questions what is right or wrong. This leads to a very interesting emotional impact on the viewer when it comes to watching these events unfold. From an emotional standpoint, this movie is pretty heavy because it shows us how war can affect people in a myriad of ways. It has some very intense action sequences that are very well done. The dialogue is also dead on, and the script will stick with you for a long time if you pay attention. In terms of cinematography, there aren’t a lot of scenes where we see the characters expressionless, which is something I would like to see more when it comes to movies.

Petr Jakl is the director of the film Medieval. Jake is a very proficient director, who has been in the industry since 1992. At that time, he started as an actor and stuntman, and now he is the main director of many of his films.