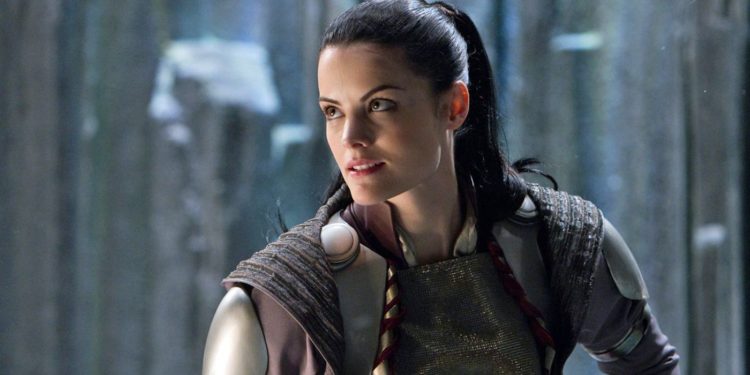 Now that Loki Episode 4 is streaming on Disney+, Lady Siff actress Jaime Alexander teases another appearance in “Thor: Love and Thunder.” The scared timeline’s Loki met his end at the beginning of “Avengers: Infinity War.” Marvel’s latest series follows the 2012 version of Tom Hiddlestone’s God of Mischief after escaping with the Tesseract in Avengers: Endgame. After being arrest by the Time Variance Authority (TVA) due to his variant status, the titular trickster and the audience are introduced to the “dangers” and possibilities of alternate timelines, nexus events, and the multiverse.

The first significant MCU character to appear came in episode 4 of Loki, “The Nexus Event.” Partway through the episode, Loki is recaptured by the TVA and thrown in a bad memory/time loop prison. That memory: a time where Loki cut off part of Lady Sif’s hair, leading Sif to continuously beat and berate the trickster.

Jaimie Alexander has been celebrating her latest MCU cameo by posting related photos on social media. In her story, Alexander teased Sif’s in the upcoming Thor: Love and Thunder and other possibly other MCU projects.

Alexander presumably wrapped filming on Thor: Love and Thunder back in March as she was in Australia at the time with the cast. While her flashback-Esque appearance in Loki doesn’t offer any hints as to Sif’s role in the film, many have speculated that Sif may tie into Valkyrie’s (Tessa Thompson) story. Thor: Love and Thunder will also see Chris Hemsworth’s Thor pass his mantel to Jane Foster (Natalie Portman) and battle with Christian Bale’s Gorr the God Butcher. Russell Crowe will also be featured as Zeus. While Hiddleston’s Loki is not expected to return, considering the chaos of his series and the implied ramifications, never say never.