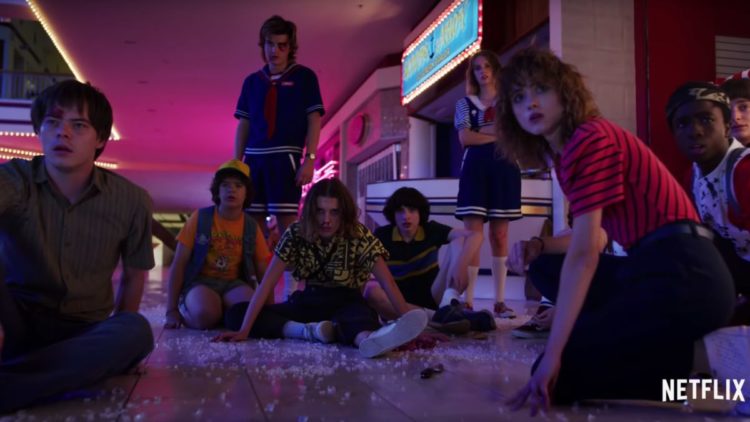 Netflix users are eagerly waiting for Stranger Things season 4. The third season ended by leaving fans in lots of suspense, and everyone already started making theories. All the main cast members are returning with some new stars. The fourth season was declared back in the previous year, and then the shooting began in early 2020 but stopped soon due to the coronavirus pandemic.

The great thing is shooting already restarted after a very long time. The cast members are back on the set. New set images also released, so keep reading to know all the things:

After the coronavirus shutdown, the shooting restarted from September 28, 2020. The cast members are obeying the coronavirus protocols. Recently actors like Gaten Matarazzo, Sadie Sink, Joe Keery, and Maya Hawke spotted together while shooting scenes at the Family Video Store location. Here are the set images featuring the four stars. Have a look:

NEW PHOTOS OF JOE KEERY ON THE SET OF STRANGER THINGS 4 IM GONNA LOSE IT pic.twitter.com/zGOyzPJ2eG

The filming is happening in Atlanta at this moment. So by seeing all these pictures, we are happy that now everything is on track. During the lockdown, the writers already finished penning the script for the fourth season of Stranger Things.

The major delay in the production also resulted in the delay of the release of the fourth season. Unfortunately, now fans have to wait for more for the most awaited season. The filming will also finish in the next year, so we cannot expect it to release soon. A particular date is yet not revealed for the upcoming season.

But we are expecting for Stranger Things Season 4 to release around mid or late 2021, as per the sources. If Netflix announces anything officially regarding its premiere, we will inform you.